Kurzeme is in western Latvia and populated in earlier times by Couronians and Livonians. Clothing styles here were shaped by its geographical location on the Baltic Sea coast, its sea ports and related economic activity. There are several distinct regional clothing styles in Kurzeme.  These include Southern Kurzeme, Alsunga, Kuldīga, Ventspils, Northern Kurzeme, Eastern Kurzeme and the Northern Kurzeme Livonian area.

The county of Southern Kurzeme comprises the lands in the southwestern corner of Latvia with a relatively long coastline, almost all of the former district of Liepāja, and part of the district of Aizpute. The older forms of clothing from this area are quite similar, while in more recent times, the parishes of Nīca, Bārta, and Rucava each developed their own distinctive style.

The county of Alsunga consists of the parishes of Alsunga, Basi, Gudenieki, and Jūrkalne which were once part of the former district of Aizpute. This area is distinct from surrounding Lutheran parishes in its adherence to the Roman Catholicism, a circumstance which also contributed to its relative isolation from the rest of Kurzeme and the subsequent persistence of traditional clothing.  The older forms of clothing, however, show many elements in common with older types of clothing from Kuldīga and, to a certain extent, Ventspils.

The county of Kuldīga comprises many of the parishes from the former district of Kuldīga, including Kuldīga, Renda, Raņķi, Turlava, Vārme, Tadaiķi, and Kurmale.  This area includes the parishes of the Couronian kings or freemen.  Traditional clothing from Kuldīga has several features in common with the clothing from Alsunga and Ventspils.

The county of Northern Kurzeme includes the parishes of Pope, Puze, Ance, and Dundaga from the former district of Talsi, and part of Ventspils. There are some similarities with Livonian clothing from Northern Kurzeme.

Eastern Kurzeme is a relatively large county and consists of the eastern parts of the former districts of Kuldīga, Liepāja, and Aizpute, the western part of Tukums, and the former parishes of Kabile, Saldus, Sātiņi, Kursīši, Pampāļi, Skrunda, Lutriņi, Blīdene, and Irlava along with some surrounding areas. The district of Tukums is considered part of Zemgale, however, its western area is culturally and historically more closely connected with Eastern Kurzeme and the clothing worn here reflects this connection. 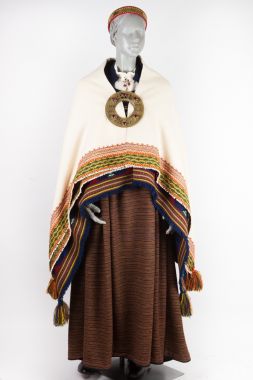 Women’s clothing from the Ventspils district in the province of Kurzeme is characterized by linen shirts in one of two styles, either two separate, rectangular fabric pieces sewn together at the shoulders, while the other has a one piece body, where the front and back consist of one contiguous piece of fabric folded over at the shoulders. The shirt has an upright collar and whitework embroidery on the collar, shoulder straps, and cuffs, fastened with small to medium size annular brooches (saktas) or fabric ribbons. 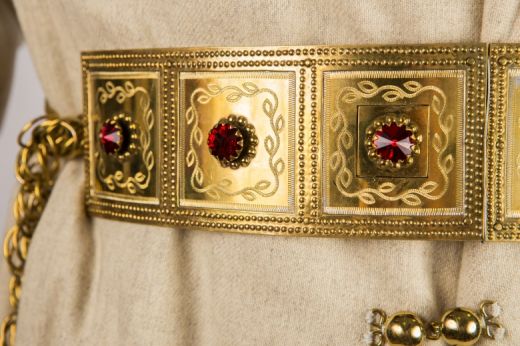 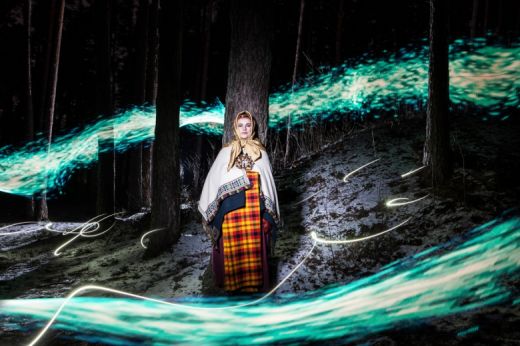 Women’s clothing from Alsunga is characterized by a long, mid-calf length linen shirt in one of two styles.  One style consists of separate, rectangular fabric pieces sewn together at the shoulders, while the other has a one piece body, where the front and back consist of one contiguous piece of fabric folded over at the shoulders. The shirt has a detachable collar and wide cuffs. The collar is embroidered with dark blue yarn or glass beads. The cuffs are embroidered with white or unbleached linen thread; alternatively with multi-coloured yarn. The shirt is fastened with a small to medium size sakta, set with polished glass stones. 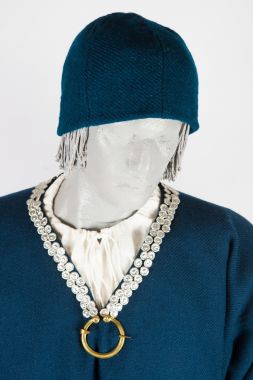