Sēlija or Augšzeme is a cultural and historical county on the left coast of Daugava river. During the period when Latvia was considered to be divided into four cultural and historical areas (Vidzeme, Latgale, Kurzeme, Zemgale), the area was included in Zemgale. The area was inhabited by ancient seedlings that span the former districts of Jēkabpils and Ilūkste. Since this municipality is partitioned relatively recently as a separate cultural and historical area of Latvia, it has not been allocated to the smaller areas of the costumes until now, despite that there are certain differences between the costumes worn in the former districts of Jēkabpils and Ilūkste. 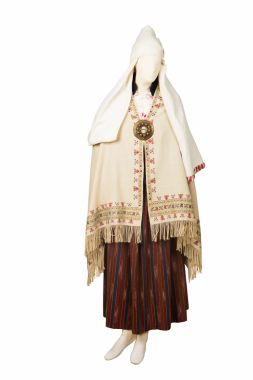 The women’s clothing from Augšzeme is characterized by a long, mid-calf linen shirt made of separate, rectangular fabric segments stitched at the shoulders or a tunic-type shirt where the front and back are made of one contiguous piece of fabric folded over at the shoulders.  There are two types of shoulder constructions, one where the shoulder straps are on the inside of the shirt and another with them sewn on the outside over the shoulder seam or fold. These are also embroidered in different ways. The shirts with straps inside had multi-coloured embroidery on the collars and cuffs, while the shirts with straps outside had red and white embroidery on the foldover collar, the shoulder straps, and the sleeves. The shirt is fastened with a small to medium size silver annular brooch (sakta) or red and white patterned fabric ribbon.