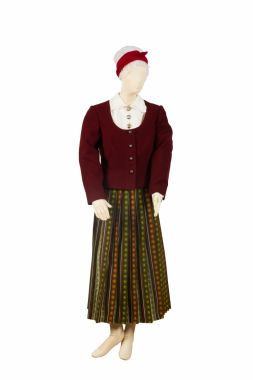 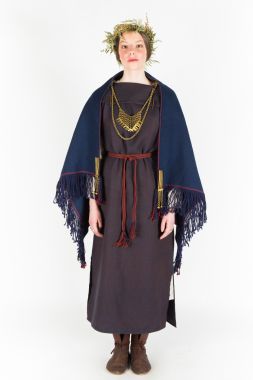 Information about the Semigallian costumes used in ancient times is limited as those textiles barely survived over the centuries. We do know that metal decorations were seldom used in their costumes but that one of the recognizable elements in Semigallian woolen shawls were the small metal spiral pendants. The way these spiral pendants were made, where they came from or how they were attached to the garments is undetermined. The most characteristic adornment of a Semigallian woman was the cruciform pin, which was used to fasten the skirt where it folds over below the shoulders.

The men’s clothing from Zemgale is characterized by a linen shirt made of separate, rectangular fabric segments stitched together at the shoulders or a tunic-type shirt where the front and back are made of one contiguous piece of fabric folded over at the shoulders. Shoulder straps are stitched over the seams and fold lines, and there is a one to two centimetre wide banded collar. The shirt is made of fine linen fabric without any embellishment. 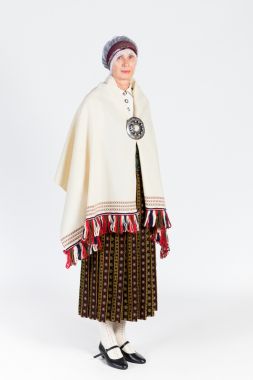 Zemgale is located in Southern Latvia.  It was once populated by the ancient Zemgalians who settled around the Lielupe River and its tributaries. In the nineteenth century, Zemgale consisted of the districts of Bauska and Jelgava, part of Eastern Tukums and the Rīga parishes on the left bank of the Daugava, which are now part of Vidzeme, even though economically and culturally they had closer ties with Zemgale. Because there are relatively few surviving articles of clothing from here, this area is not subdivided further. Even so, differences can be observed between the eastern and western areas. Traditional clothing here was shaped by the area’s affluence, well-developed agricultural, manufacturing, and trade sectors.