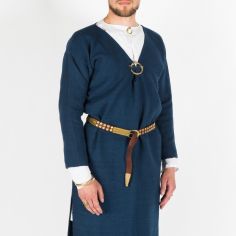 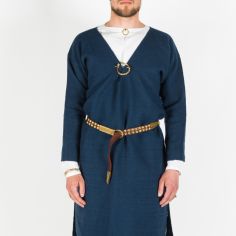 Men's everyday costume consisted of a linen shirt, woolen trousers, a jacket, leg bindings and a hat. These garments appeared to be free of ethnic variations in style since  the clothing was practical and without special decorations. The footwear consisted of leather ankle boots. Outer garments were fastened with a leather belt, which was sometimes decorated with metal bindings. Adornments were used more for practical purposes – pinning up shirts and jackets. They were used in small numbers – sometimes men put on armbands and rings on their fingers. Only members of society with high ranking social status wore a larger number of adornments.